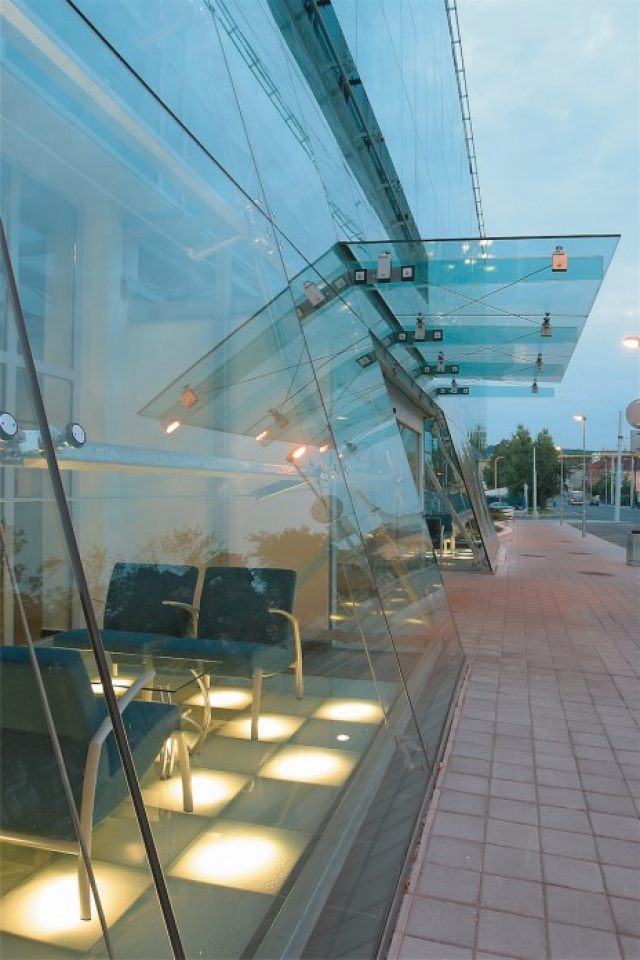 Glaverbel Czech, a.s., a member of the Glaverbel group, is the biggest producer of flat glass and flat glass applications in Central and East Europe. The prestigious project to develop new state-of-the-art cladding for Glaverbel´s headquarters was a challenge for Sipral and at the same time evidence of the appreciation and level of trust placed in the quality of Sipral´s work by one of the world’s biggest glass suppliers. The entire reconstruction of the building and replacement of its cladding, including the removal of the building’s top three floors, were carried out while the building was still in use. As a result, the cladding was installed in two phases, with the first to third floors completed first followed by the fourth and fifth floors. The original façade of Boletice panels was replaced by a new and intelligently designed double façade that helps remove heat from the building in the summer, decreases the building’s thermal demands and use of the air-conditioning system. In the winter, the façade is connected to the building’s HVAC system - air is preheated and heat losses are minimized, thereby saving about 15% of energy necessary for heating the building. The new cladding was designed as an energy-saving double façade. Its internal surface is composed of a double-glazed Wicona grid façade; the external façade, which is not connected to the internal facade, consists of single, hardened rotula-fixed glass panes that are attached to a steel supporting structure. Centrally controlled ventilation flaps are installed in the upper part, while the double façade is open in the lower portion. Interesting architectural features of the building include an outward-leaning structural façade of a secondary stairway and a ventilated cladding with enameled glass in the Styl 2000 system. Naturally, Glaverbel Czech was the supplier of all the glass used in the building. The internal façade consists of double-glazing units that were made of 6mm Planibel Azur glass, 4mm Planibel Top N glass and insulating panels with Colorbel glass. The façade, which is not connected to the building, was assembled with 12mm Planibel Linea Azzurra glass produced in Glaverbel’s manufacturing facility in Cuneo. This glass was also used, to the extent possible, for the non-standard internal partition walls and a 1.5 x 6m awning above the main entrance. The awning is glazed with rotula-fixed panes, and 19mm glass fins were used as structural components and connected to conical steel blades.