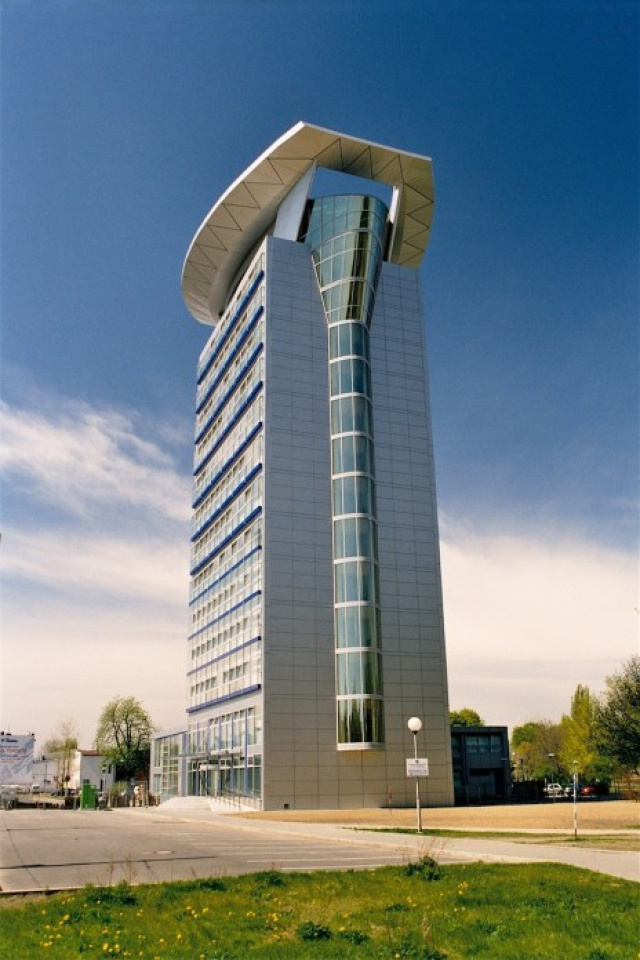 The new headquarters of SMP are the result of a complete reconstruction of the original administrative building used by this gas supplier – a 14-storey building with a reinforced concrete skeleton that was constructed between 1967 and 1971. Thanks to the attractive appearance of the facades and a ship-shaped superstructure, the reconstructed building became a modern and dominant architectural feature of Ostrava. In addition, it won the Stavba roku 2003 award (the 2003 Building of the Year). Sipral supplied complete cladding for the building, including that used in the two-storey superstructure, with the exception of the north courtyard façade. A feature specific to the high-rise building’s two grid façades is an extremely articulated surface, which was created by combining Alucobond aluminum cassettes with projecting glazed ribbon windows -- boxes whose height decreases in step with each subsequent floor of the building. Below the boxes and under the attic are placed ribbons of blue enameled glass panes that cover fluorescent tubes illuminating the facades. The most demanding part of the project was a glazed ”tube“ housing meeting rooms and connecting the 2nd to 14th floors of the east facade. The tube is in the shape of an ellipsoidal cone segment with a wide top so as to resemble a funnel. Each corner glass pane and each pair of the opposite curved laminated glass panes of this funnel has a unique shape. The upper part of the elliptical east façade consists of a rotula façade supported by a steel structure made of curved profiles into which lighting fixtures have been built in to illuminate the interior. This glazed roof smoothly passes into the membrane roofing of the self-supporting superstructure. Another tricky part of the project was to clad the two-storey superstructure with a projecting, continuous awning with rotula-fixed glass panes and an attic with Alucobond curved panels with a minimum diameter of 70 mm. The cladding of the so-called "cap" of the building, with a height of 53 meters, was similarly difficult. The assembly was carried out via projected scaffolding. The cladding follows the warped round shape of the reinforced concrete structure and consists of 4x3m triangular panels. This cladding was designed with the help of 3D-modeling.