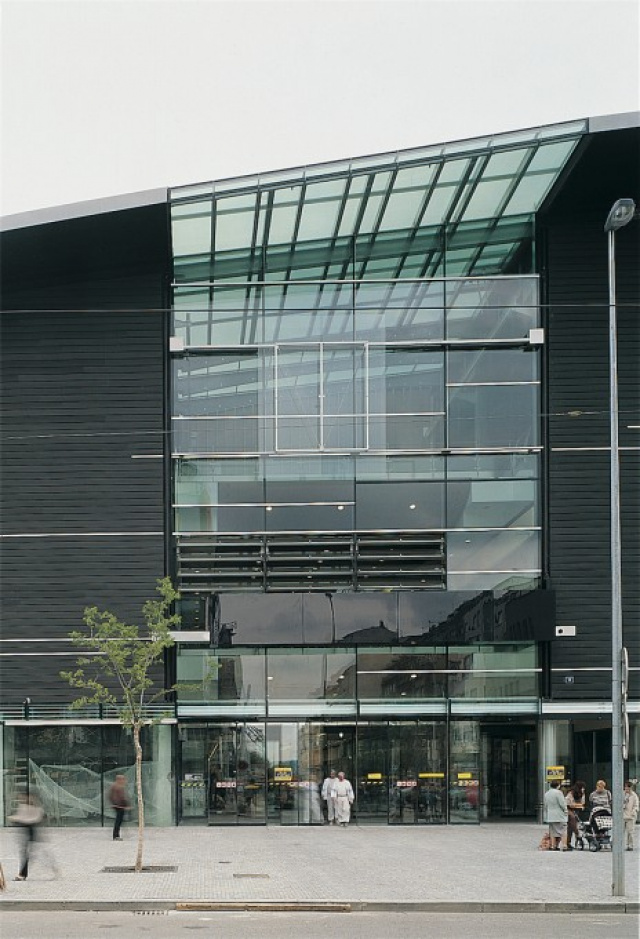 Arising on the site of the former CKD-Ringhoffer tram-works, the sizeable commercial and entertainment centre “Novy Smichov” is atypical in comparison to other structures of a similar function in that is lies relatively close to the centre of Prague, in a thickly-build urban area. Sipral supplied two facades for this central feature (together with the administrative building Zlaty Andel) of the new district of Novy Smichov: one being the atypical curtain wall facing the street Plzenska and the other, the semi-structural facade of Schüco system on the structure facing Kartouzska street. The curtain wall facing Plzenska street Forming the main entrance to KOC Novy Smichov complex and simultaneously creating the front wall of the arcade between the two independent structures of the complex, the curtain wall was designed as a glazed, maximally load-free structure, capturing the attention of visitors with its translucence and inviting them to enter the complex. The facade consists of a suspended glazed wall (250 m2), a 15 m long steel trussed beam, and the suspended glass ceiling of the canopy (50 m2). To achieve the requirement of maximum load lightness, the classic load-bearing mullion – transom was not used, and in its place one of mutually connected flexible elements – Ian. Addressing this task was a challenge for Sipral and its success changes this facade into a unique work. The point of the whole solution lies in the placement of load-bearing elements – tension rods of high-strength steel – in vertical joints between the glass units: as such, the bearing system becomes invisible. Suspended on the tension rods are stainless-steel transoms, against which the individual glass units are leaned. The entire system is then suspended on a stainless-steel structure, held together with bolts. Because of the horizontal forces of wind loading, the facade is supported throughout at floor height levels with two contra-rotating stainless pre-stressed ropes. The complete spatial structure of the facade is stabilised with three vertical pre-stressed steel cables placed at a distance of 500 mm from the glass inner face. Supplied by Carlstahl, they are of Dyform 1 × 19 type with 10 mm diameter; i.e., pre-stressed stabilised cables with trapezoidal strands. They were used for this facade because of the more advantageous values of elastic modulus and bearing capacity in comparison with standard ropes. The hardened glass units have the following measurements: outer – 12mm thick, inner – 8mm thick, with dimensions of 2140 x 2875 mm. Considering that no facade of similar type had ever before been constructed in the Czech Republic, it was necessary to address problems specific for this branch: the pre-stress of the cables, the behaviour of a flexible facade as a whole, its reactions with the other facades, installation procedures. (Many factors came into play: the movement of buildings connected with the facade, temperature effect on the structure, influence of cable slack, and so on. Various sizes and combinations of pre-stress forces were assessed with regard to the behaviour of a facade as a whole and installation procedure). As the entire design was atypical, it was also necessary to elaborate non-standard installation methods for the whole structure, which had to keep in mind the flexible behaviour of all elements: for example, the prolongation of tension rods and steel roof structure deformation after glass loading, the mutual effect of individual structural elements, overall structural stability. A check of specified pre-stressed forces in cables was also a special task. Glazed louvers for the system of smoke and heat exhaust are also a part of the facade. Each individual plate of the louver consists of a steel rotating mechanism to which a point-fixed tempered glass unit is attached. A group of four mechanisms is connected with electric motors, using a system of tension rods. Sipral also supplied two movable elements for this facade and placed in front of it. One of them is the information billboard consisting of two tempered glass panes (2 x 5.1 m) point-fixed on a stainless frame. The billboard runs horizontally along the facade on steel rails. The second is a service walkway, consisting of a horizontal girder of rectangular cross-section and the frame structure of the railings. From the walkway, it is possible to reach any possible area of the facade by moving the girder vertically or by moving the frame horizontally. The frame structure is created from aluminium profiles, on which the frames are set with structurally mortared enamelled glass. The various positions of billboard and walkway in relation to one another give the facade an element of changeability and mystery. The semi-structural facade towards Kartouzska street Along the north-western side of KOC, the facade is rendered using the system Schüco FW 50 SG with atypical pillars 7m in length. For the glazing, insulating double glass was used, with the exterior plate of clear glass and the interior plate bonded from two plates; the plate facing the air gap has a metalled finish, while the one facing the interior is of Crepi ornamental glass. The facade is set forward approximately 450 mm from the outside of the concrete structure; in between, movable apparatuses for maintaining the interior facade surface are installed. Hinged louvers of the same construction as the Plzenska facade are inserted into this one as well. The area of this facade measures approximately 450 m2.