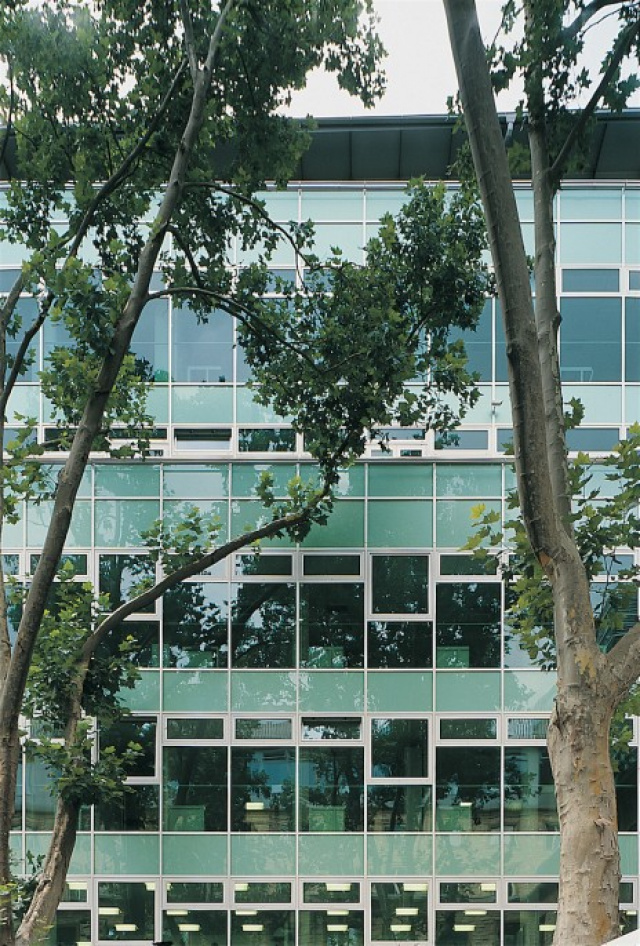 The “Slavic House” (Slovansky dum) is a well-known registered landmark in the very centre of Prague – in the main shopping street Na Prikope. Subjected to a thorough reconstruction, it was rebuilt into an administrative and commercial facility also containing a multiplex cinema. In addition, several adjoining buildings had additions completed for them. Sipral supplied external cladding for a majority of the structures in the complex, the glazed roof structure of the atrium, and a winter garden for the area termed the “Beer Court” (Pivni dvur). The glazed atrium roofing in building A covers an area of more than 1000 m2. Its bearing structure made of welded steel profiles is with a central spinal frame and on the first floor is anchored into the adjoining buildings. The atrium roof has only a minimum slope and is drained into a central gutter. Considering the fact that it covers a fire escape staircase, the structures and the glazing had to be fire-rated. The glazed grid facade of building B has an area of approximately 700 m2 , and is made using the Schüco FW50+ system. Green Planibel glass was chosen for the glazing, as the architects were inspired by the original appearance of the building, before the re-construction covered in ivy. Building C is predominantly clad with stone, which is perforated with band windows of the Schüco RS65 system. The grid facade of the Schüco FW50+ system situated on the site of the staircase structure makes for a peaceful visual transition between buildings B and C, and is also used on building B. On the ground floor are shops with glass display windows. Building E has a completely glazed aluminium cladding – also of Schüco FW50+ system – in which insulated facade components alternate with the aluminium band windows of the individual floors. On the last two floors of this building are two conference rooms, which have an sloping all-glass roof. The last building of the Slovansky dum complex in which Sipral also took part in the so-called “Beer Court“. Sipral supplied the large structures of glazed winter gardens for the café and pizzeria; though similar to the atrium of building A, they are not fire rated. The entire garden roof is equipped with external cloth shutters, which are sensor-controlled and thus react to intensity of light and wind force. The front wall of the right bay of the “Beer Court“ is completed by sliding doors; the left bay is made of fixed glazing. Slovansky dum is an a structure in which it is possible to see nearly the entire range of Sipral’s productive capacities, and documents the firm’s ability to meet a wide range of client requirements on one building at a time.