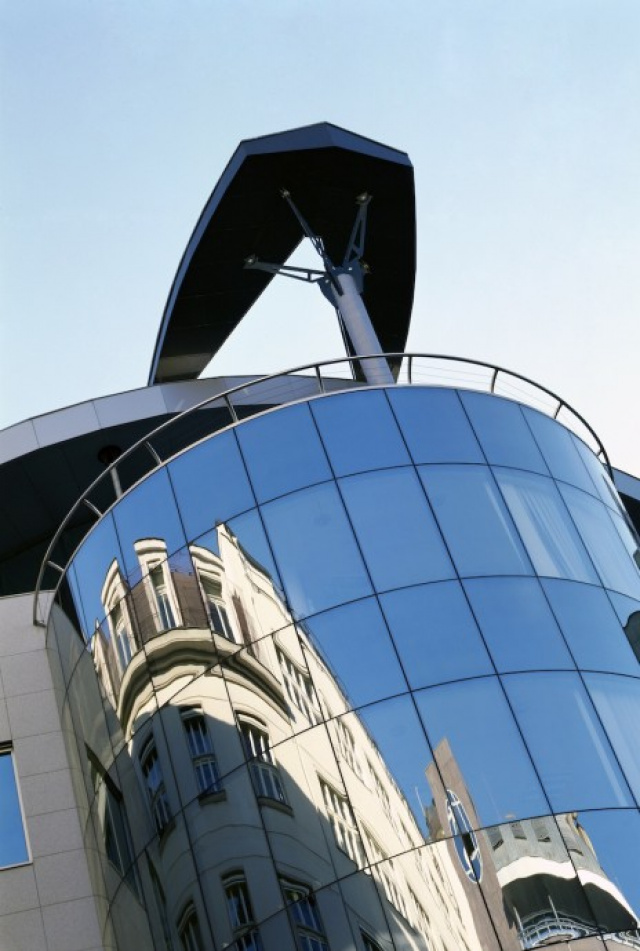 After a successful re-construction of its historical premises the former Bank of the Czechoslovak Legions and the Legionnaires’Insurance Company in the street Na Porici, the Czechoslovak Commercial Bank (CSOB) decided to supplement its main Prague branch with two new structures. Constructed inside a highly frequented arcade leading from Masaryk station to Bílá labuť department store these new buildings are directly connected to the restored earlier objects. For this reason, the designers chose to underscore the contemporary aspect of the additions by highlighting the facade glazing with blue, green and silver Stopsol Supersilver glass. The glass units reflect not only the surrounding construction but equally the sky, and hence illuminate the atrium confined by the buildings. In spite of the same materials being used for the cladding on both buildings, their resulting appearance is diametrically different. One is a composition of severe right angles, with exposed aluminium facade elements, while the second is based on a central cylindrical volume of curved glass plates, with all surfaces structurally glazed. Skylights in the shape of triangular pyramids set in greenery illuminate the spaces under the atrium and moreover create an interesting visual effect by reflecting the facades situated above the atrium. These skylights are also constructed with structural glazing. In addition, the stone-clad steel structure in the shape of a wing above the cylindrical facade volume captivates the viewer’s attention as much as the bird-like arcade roofing. In this commission, Sipral was represented as the general supplier of  both objects’external cladding, predominantly making use of the Hueck KF 50 aluminium facade systems, the Hueck GF 60 structural system and the Hueck 2.1 IF system of aluminium windows. For fire-tested structures, the ABS system was used; inner partitions are made according to the Hueck A 72 system. Sipral also provided stone and Alucobond-clad structures and handrail stainless structures, mullion cladding, HVAC louvers of stainless steel or aluminium. The exterior shading louvers were a functional complement.