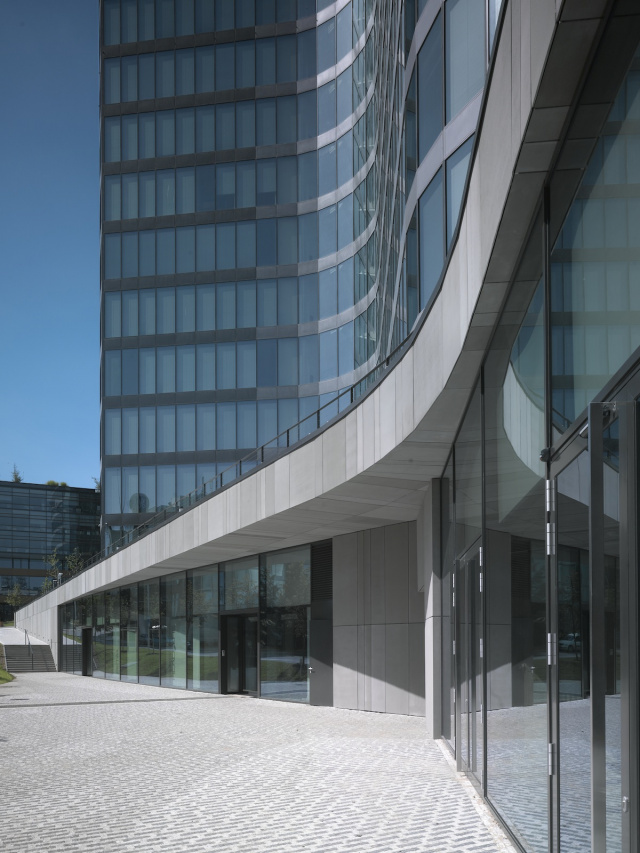 You cannot miss Filadelfie administrative building in Michle, Prague since being seventy meter high it is really visible. The facade waves evoke dynamic feelings and dematerialize the building’s basic shape. This effect is also supported by its glazing made of all-glazed glass-aluminum facade. When designing Filadelfie Sipral discussed and considered what kind of facade envelope would be the most suitable. For a high-rise building, size of the facade area, the required speed of construction, it all spoke for use of a pre-fabricated element design. On the other hand the building shape, angle of turn between individual axes and seventeen different angles in total in one quarter of the building – these were suitable for a standard stick facade system which can solve such turn in the place of a mullion quite easily. Nevertheless this system’s installation would be slower, would need scaffolding or installation platforms, would bring a higher risk of element damage and also would be more influenced by weather, temperature and wind.At the end it was decided to use the element system with the fact that it will be necessary to develop a new facade element system or adjust an older one for the realization. 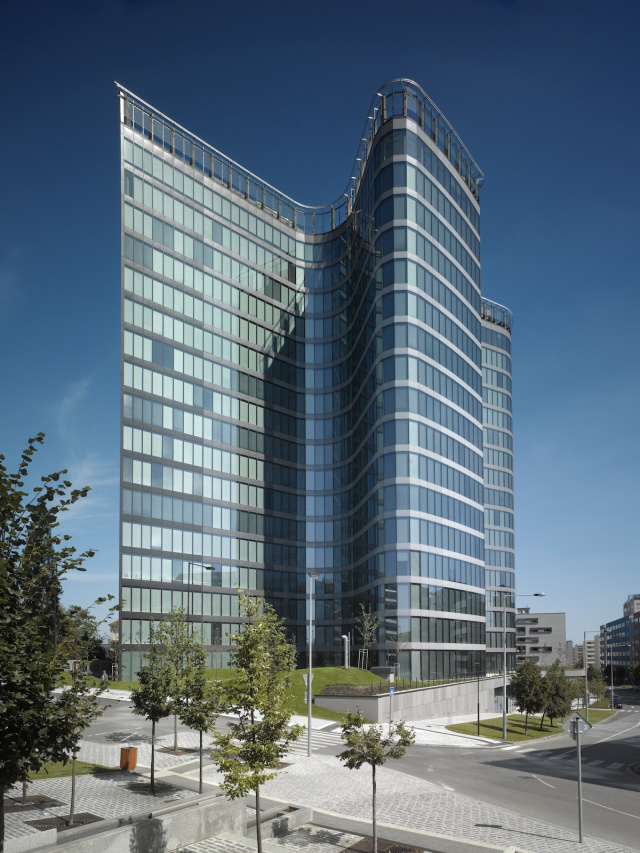 With regards to the above mentioned seventeen different angles of turn there were two possibilities how to solve the construction. Either to design a single profile for each angle or to use one type of mullion profile, if possible, and use an adaptor for each angle. Finally the latter variant was chosen but it was necessary to make one more mullion profile for the biggest angle. There were 2 530 modules used in total for the high-rise building envelope. Assembly of individual modules was not easy since external surfaces of modules were in different shades which made the project logistics quite complex. The modules were made in two widths 1,35 and 2,7 m and individual height of 3,9 m. They consist of a peripheral aluminum frame and one transom at the level of concrete ceiling slab bottom edge.  Modules that are 2,7 m wide have a mullion in the middle. At the place where the building arch has a big radius there were used 2,7 m wide modules and on the other hand half-width modules were used at the place of a small radius.

Modules are glazed with insulating safety glass with a selective layer of Ipasol Neutral 48/27. Non-transparent parts are covered with 2 mm wide aluminum lacquered sheet cassettes. There was a Rostek special rail system that enables to install modules without a crane even under demanding weather conditions. The rail system was then mounted on the 18th, the highest floor and serves for maintenance. Total installation time was five and a half months.