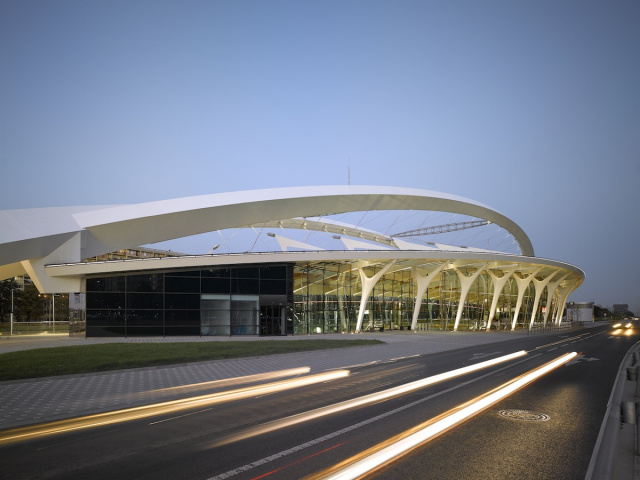 Střížkov station forms part of the 3rd stage of Prague C line construction going from Holešovice to Letňany. The station as well as most of them in the 3rd stage is excavated but as the only under-surface one it is open into space thanks to its glazed envelope, that goes above the surrounding terrain of the Prosek park.  Glazed roof of the station is hung on two robust welded archs of rectangular cross-section that intersect and it is supported with swing supports along its perimeter. Glass walls are supported with individual construction of columns and crossbars of truss type welded of stainless thin-walled profiles. On both ends of superficial part of the building, above mouths of a tunnel, there are commercial and technological spaces partially enclosed with a light peripheral envelope.The south-western facade adjacent to Vysočanská street and public transport bus stops, is glazed only above the terrain level and enables access to a bridge through a track yard. The bridge goes through the station space. North-eastern facade is embedded in nearly seven-meter deep cut under the surrounding terrain of the park, and enlightens and opens the platform towards free space. Sipral delivered the glazed envelope and supporting constructions.The glazed envelope of the station space  is made of panes of single safety glass fixed with disks of AGC Structura system. On the lowest level of the north-eastern facade, under staircase there is a temperate space for commercial activities. A part of the facade envelope, enclosing this space is equipped with panes of insulating double-glass also fixed with disks. The total area of the glazed envelope is 1 850 m2.Stainless anchoring elements of disk holders are fixed to the supporting truss columns with a unique system that enables three-dimensional rectification of anchors. Another interesting item is the supporting construction of the glazed envelope is placed in the principal arched part of the facade in the exterior and in the lateral, linear fields in the interior.Levelling of anchoring points in three axes was a really demanding task particularly in the principal arched part of the facade, where the anchoring points appeared in the interior. It was also difficulat to install the panes since we could not use current crane technology because of the overlapping roof.