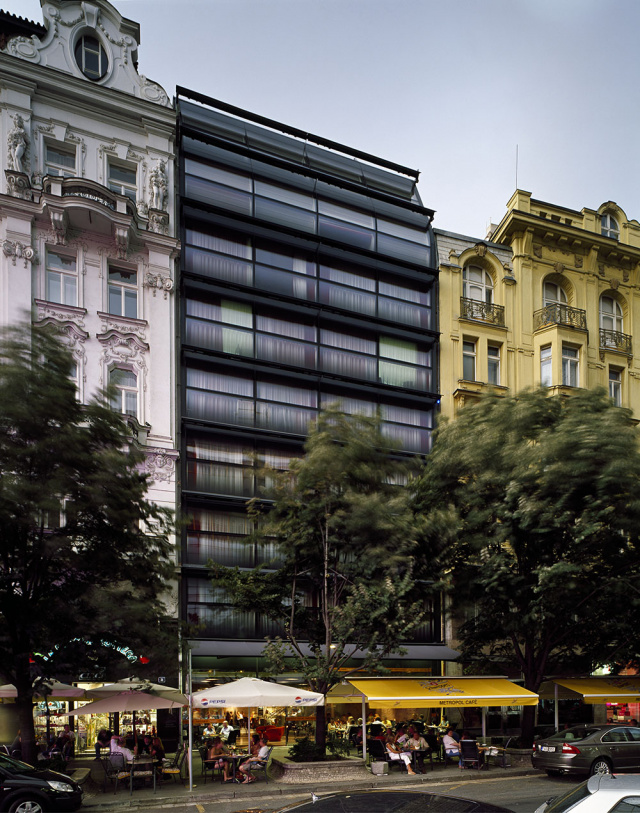 Metropol, a four-star hotel was made by reconstruction of former administrative building of Sportturist travel agency on Národní třída, in Prague. Within proportions of the building from 1967–1971 there was created a space for modern architecture respecting needs of a modern hotel.The peripheral envelope delivered by Sipral is made of two main parts, a street facade turned to Národní street and a „yard“ facade towards the inner yard that in the bottom parts above the ground-floor becomes a skylight above the hotel restaurant. The street facade is a shop window of the hotel and according to this it was treated. There is an exclusive all glazed structural facade with large-scale glass units. On the sixth floor there is a curvature created with bent glass units and the facade envelope goes down inside the disposition. The used extra clear glass panes are „packed“ with the latest technologies. Since they create the only envelope of the building they have to meet many functions. First of all the thermally technical one, safety (in spandrel parts), acoustic and aesthetical. A print pattern on glass panes was designed by architects and was atypically applied on the outer side of each pane. Such there is created a smooth transition from a full part in the place of ceiling slabs to the fully glazed part. The transition is most visible at night when internal lights in rooms are lit. There are motor-controlled out-tilting windows integrated in the facade. A window is designed across the whole width of one module, i.e. the whole width of a hotel room. Anti-solar protection of interiors is done with automatic pull-out textile canopies which are 6 m long and their span is 1,5 m. These are installed on each floor. At the level of the ceiling above the ground-floor there is a textile canopy with a span of 3,5 m, that shades the entrance part and a café.The yard facade is similar to the street one but the external anti-solar shading is missing. At the level of the ceiling slab the facade continues with an oblique plane of a skylight above the hotel restaurant. The arc is again formed with bent glass panes equipped with a print with the same logic as on the street facade.Atypical shape of the peripheral envelope called for a design of atypical device for cleaning and maintenance of the facade. The device is composed of a telescopic part placed on the hotel roof. This part is extended by 2,5 m over the parapet edge and enables climbers access to the vertical part of the facade. There is one device for the street facade and one for the yard facade. For maintenance and service of the skylight there is a service access platform moving on rails above the skylight and in its final position it is parked on the side of the skylight. Large-scale clear glass panes of the facade are low-reflective. In the envelope there are motor-controlled opening windows of rooms and the whole street facade on the ground floor can be drawn up.The building was nominated for The Building of the year 2007 (final nomination) and was awarded the price of The Association of Building Entrepreneurs of the Czech Republic (ABE).