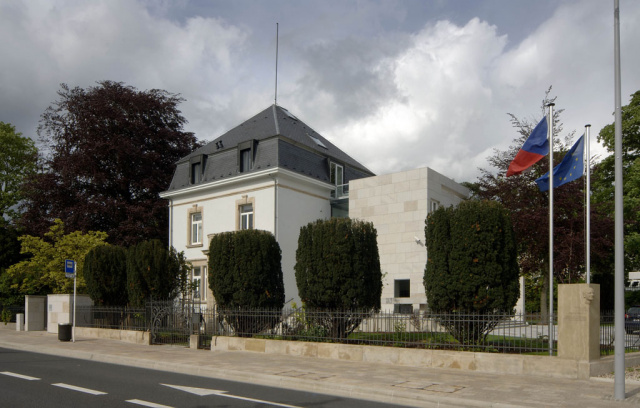 The embassy is placed in a very famous villa, that forms part of Luxembourg national cultural heritage. The house is adjaicing to The City theatre and the embassies of the USA and Spain, at the interface of the city historical center and Limpertsberg residential district. It was built in 1915 by Mr. Georges Traus, a Luxembourg architect. The house used to be a villa of Mr. Pierre Werner, a former Luxembourg prime minister. His family offered the property to the Czech Republic as a new EU member, which bought it for a new resident embassy.  The Czech Republic bought the building in 2005 and then it was largely re-constructed.Within the reconstruction there was a gallery added to the existing building. The gallery is a glazed building projecting into a garden. It is aimed for exhibitions and social events of the embassy. The gallery is a very light and airy building interconnected with the garden through several sliding doors. There is an atypical roof structure  supported by all glazed glued beams.In this project Sipral delivered opening doors, fixed glazing of staircases, point-fixed railings. We also made the gallery glazing, its bearing steel structure and mainly atypical bearing structure of the roof made of all-glazed beams difficult-to-fabricate.All-glazed roof of the gallery (35,0 x 5,15 m) is made of 32 glazed frames supporting glass panes of the roof and vertical facades. Glass frames are assembled of single laminated glass 3x15 mm glued in corners with transparent silicone sealant. Total size or the frames is 5,05x1,3 m, the roof is designed under the sloping of 2% and that is the reason why the upper cross-bar has a variable height of 32-42 cm.Mullions of frames placed at the distance of1,1 m are encambered through clamp connections into steel bases that form part of the bearing steel structure.Thermal-insulating double glass units of walls and the roof are glued onto glass frames with a black structural sealant.  In the longitudinal facade there are 4 sliding glazed double doors suspended on the bearing steel structure of the gallery.